You have to love billionaires with a sense of humor. Today, that would be Mark Cuban, owner of the Dallas Mavericks basketball team. Cuban says he’ll pay the Donald (Donald Trump, that is) $1 million toward a charity of his choice if he shaves his head, reports Keith Whitmire at Fox Sports. 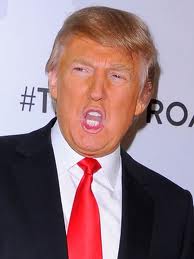 The challenge from Cuban follows nicely on the heels of Donald Trump’s ludicrous offer last week to give $5 million to charity if President Obama produced college transcripts and passport applications. (See my colleague Clare O’Connor‘s take on that here, with an explanation of sorts from Trump.) With all the focus on Superstorm Sandy this week, Trump’s offer didn’t get much air play. It didn’t deserve much. And then it expired.

Cuban, who’s worth an estimated $2.3 billion as of the Forbes 400 List in September, can certainly spare the $1 million. While being interviewed on TV in Dallas on Thursday night ahead of the Mavs home opener, the reporter asked Cuban what he thought of Trump’s offer.

“The offer he made for five million, that was one of the dumbest things ever,” Cuban said, according to Whitmire. “I thought about responding to that. Maybe I’ll put up a million or two if he’ll shave his head. What do you think?”  Later in the interview, Cuban made the offer official. “Donald, you shave your head, a million dollars to any charity you want.”

With a net worth Forbes estimates at $3.1 billion, Trump doesn’t exactly need Cuban’s money, whether it’s for charity or anything else.

I called Donald Trump’s representative to get a response from The Donald, but I haven’t heard back yet.

My bet: Trump keeps all his hair. What’s your best guess?